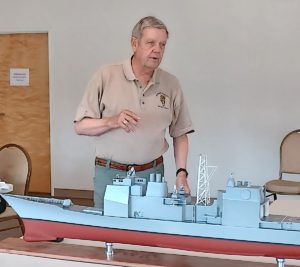 Captain Nick Richards, USN, Ret. spoke at La Grande Rotary this last Tuesday. His presentation focused on the USS Port Royal, the cruiser he commanded for four years. He demonstrated how the antimissile systems operated by sending a “bird” out every two seconds to intercept incoming missiles. These ships constantly patrol the seas and provide the United States with an umbrella of protection for the rest of the fleet. Captain Richards attended the recent decommissioning of the ship in Hawaii and reported that thus far, she has not been replaced.